Showing posts from February, 2012
Show all

February 23, 2012
WARNING : As of 2012-02-27, and after further hacking, there are two blocking issues preventing IndexedDB from working properly. You can't delete an object by a key , and retrieved objects aren't actually objects . IndexedDB is the new way to store key and indexed objects for offline retrieval in web apps. Learn how to use IndexedDB in your Dart application. (Warning: this code isn't pretty, and many bugs were filed. This should get cleaned up soon. Regardless, it works! Also, you'll need the bleeding_edge branch of code, as of 2012-02-23.) Why offline data storage? Use client side local data storage to reduce bandwidth bills, decrease latency, increase UI performance, and allow your application to run offline. Local data storage options There are three options for storing local data for your web apps. Local Storage (aka Web storage) is a very simple key/value store, however it can only store strings and is a blocking/synchronous API. Local Storage is bett
Read more

February 17, 2012
Intro Dart is an optionally typed language, which means it helps you if you add static types, but doesn't get in the way if you don't. Dart is designed to allow you to scale from simple scripts to large, complex applications, and optional types are a key feature for this vision. Because types are optional, Dart programs must have the same runtime semantics with or without type statements. If the type statements are ignored during runtime, what good are they? Think of type statements more like documentation or annotations for your program. Once added, these types are a terse way for you to express your intent to both your fellow humans and your fellow machines. Using the type annotations to express "x is a number" is a great way to clearly indicate what x is so other developers know how to use it. Compilers can use this annotation to warn you if you do something unnatural with x. Example Consider the following interface: interface Util {   add(a, b); }
Read more

Classes in Dart, Part One

February 16, 2012
(This is part 12 in an ongoing series on Dart. See part 11, Booleans in Dart .) Intro Dart is a familiar object oriented programming language, with classes, single inheritance, and interfaces. You can build classes and instantiate objects pretty much like how you would expect, with a few caveats and pleasant surprises. This post is the first in a series of posts that will explore classes in Dart. If you think you need to use classes when programming in Dart, think again. Dart is a scripting language, which implies you can write "short and sweet" scripts and programs with ease. Dart functions very well with only, well, er,  functions, alleviating the requirement to build classes. In fact, I've made it through eleven posts here in this series without talking about classes. You can get far with just functions in Dart. Dart is built to be scalable, helping you as your program grows in scope. You may start with a collection of functions, but as complexity increases, e
Read more 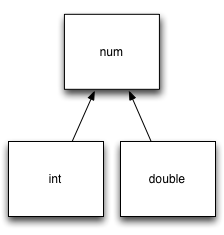 (This is part 10 in an ongoing series about Dart. Check out part 9, a Dart SDK quick tour .) Intro It's time to look at numbers in Dart. Wait, where are you going? Come back, numbers are cool! This will be interesting, for reals. I can at least promise this will be easy and quick, for numbers in Dart aren't complicated. If you're compiling to JavaScript, though, there are a few edge cases (bugs?) so I encourage you to not skip this episode. The Basics Like everything else in Dart, numbers are objects. In fact, numbers are specified as interfaces. Numbers come in two flavors in Dart: integers of arbitrary size and decimal 64 bit doubles as specified by the IEEE 754 standard. Both int and double are subinterfaces of num . num is the supertype, int and double extend num. The num interface defines the basics like +, -, /, and *. Num is where you'll also find abs() , ceil() , and floor() , among other methods. Int Integers are numbers without a decimal
Read more
More posts