So far we have been looking at worlds that interact merely from gravity, or motorized joints. The demos have been fairly calm. Time to add a bit more excitement with the introduction of Impulses. Using an impulse, we can immediately change a body's velocity.

Box2D has two seemingly similar ways to inject a little life into your bodies.

There's a lot of confusion over what the difference is between the two methods. If you need a quick obvious change, use ApplyImpulse. If you need to slowly change over time, use ApplyForce. 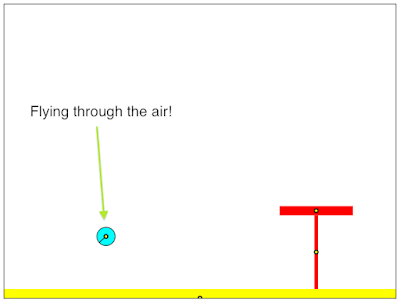 The demo above has a stand alone version and the source code is available.

As you can see, we have the beginnings of an Angry Birds clone. An impulse is applied to the circle which propels it through the air, eventually crashing into innocent blocks.

The object configuration is straight forward:

Both force and impulse require a vector, specifically a b2Vec2, for direction and magnitude. The following code is an easy way to create an impulse:


To compute the vector for the impulse, the direction (in terms of degrees) and power (an arbitrary multiplier provided by me to test different powers) are combined.

Box2D allows you to add force and impulses to bodies. Adding an impulse is like hitting a body with a hard bat. Adding force over time is like pushing on a body.

Please continue to follow along and learn about Box2D, Collision detection, and Damage.

Thanks for continuing to follow along. Your comments help, let me know what other topics you're looking for.
box2d games html5 javascript